I finally sent my novel "Llama Dreams" off to the Amazon Breakthrough Novelist Competition. Woohoo!! 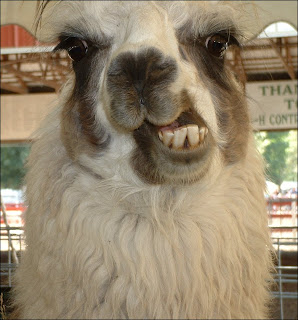 Fingers crossed Transist Uranus conjunct my P. Moon will give me the shock I need!!

In honour of shocks, here's a special Uranus crossing the ascendant joke for llama lover everywhere:

A man boards a train and takes a seat opposite to a woman holding a small baby. As the train moves out of the station, he picks up his newspaper to read it. However, it isn't too long before he is completely distracted by the baby. He smiles at the baby and tries to return to the paper but every time he finds something he wants to read, the baby catches his attention. Before long, the man is laughing. He puts his paper down and says to the young mother: "Bar none, that is the ugliest baby I have ever seen!" and he laughs some more.

The poor mother, however, bursts into tears.

After a few minutes, the man starts to feel bad and he gets up and goes to the buffet car, returning with a cup of tea and a banana.

He holds these out to the mother and says: "I'm really sorry. Here, take these so you know how sorry I am!"

The mother says: "Thanks for the tea but I don't like bananas."

The man says: "The banana isn't for you--it's for your monkey!"