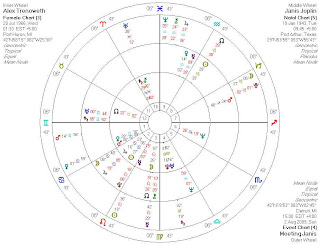 Anyway, I wish you a very happy new year! Here's a special triple conjunction of Neptune, Jupiter and Mercury joke:

God, grant me the senility to forget the people I never liked anyway,

The good fortune to run into the ones that I do,

And the eyesight to tell the difference.

Posted by Alex Trenoweth at 17:38 No comments: Links to this post

It's taken me a full week to recover from this hectic term! I'm just about to the point where I'm ready to venture out into the world!

While I've been recovering and NOT thinking about school, I've been writing a novel. I'm very pleased to say I've reached 55,000 words and am very near to completing the first draft. I'm also preparing a talk for the Lodge and re-working my MA dissertation, having been inspired by my friend Darby. It's so much more fun than teaching teenagers to appreciate random chunks of Shakespeare chosen for them by them by the good people who also insist on inflicting inspections on teachers because that makes teaching such a joyful profession.
Anyway, I don't want to complaing about work on Christmas day! I want to share the joy of having good, spontaneous friends who pop in for tea on the way home from a hard day of busking! Here's a photo of my friend Sebastian who did just that. He even had a special song for my cat, Mr Bubbles and his magical spacesuit. Here's the photo: 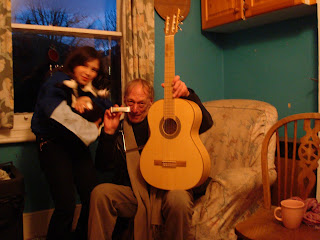 To celebrate spontaneous moments, here's a spontaneous moment that marked the beginning of the tradition for putting an angel on top of the Christmas tree. Let's call it Saturn in 6th for when there's a bad day at work.

One Christmas Eve, Santa was having a very bad day. Firstly, his best elves came down with swine flu and had to be replaced with less experienced elves who weren't as quick as the other ones. So Santa was feeling the pressure of falling behind schedule.

And then Mrs Claus announced her mother was coming over for Christmas dinner and this really upset poor Santa.

And then three of the reindeer escaped. It took a good while to round them up, making him even more late.

And then, as he was loading the sleigh, the bag ripped and toys spilled all over the place. So he had to pick them up but discovered the address tags had come off. It took some time to sort this out.

By this time, he was so late, he thought it wouldn't matter if he took a few more minutes to get a quick shot of rum from indoors. He was in such a rush that just as he got the bottle opened, it slipped from his mittened hands and crashed to the floor.

Just then, there was a knock at the door. Furious, Santa went to answer it.

Thus came the tradition of the angel on top of the tree.

Posted by Alex Trenoweth at 23:40 No comments: Links to this post 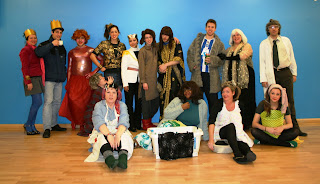 Every year my school puts on a Christmas Pantomime--which displays the very bizarrest of British humour.

I'm so worn out, I don't think I'll be able to hold up my wine glass to make a toast to the end of the term.

Oh wait, I seem to be getting my strength back. . .

Posted by Alex Trenoweth at 12:37 No comments: Links to this post

On top of everything else I've forgotten, I've left me mum out. Sorry mum. Love you and happy birthday.

Here's a photo of us on the reservation: 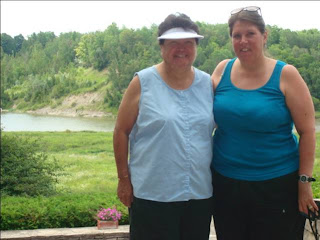 To celebrate having a great mum (just look how I turned out!), here is very special, very clean joke Saturn in the 4th house joke just for her:

The "head" of the household and his wife were experiencing problems assembling their computer system. Finally, they gave in and decided to ring a technician. When he answered, the technician gave them instructions in unintelligible computer jargo.

Frustrated, the husband said: "Look just talk to me like I'm a four-year-old."

"OK," said the technician, "Can you put your mommy on the line?"

Posted by Alex Trenoweth at 17:34 No comments: Links to this post

I took a little break from writing yesterday so I could attend the Lodge's Christmas party--and gosh, am I ever glad I went. It is soooo nice to be relieved of Lodge duties for an evening. I had a great chat with my buddy Claire Chandler and her hubby Russ, John Etherington and I shared a few Christmas jokes. And, wait for it, Darby Costello and I swapped Mercury stories. Sometimes, you just got to relax with friends. It bolsters the creative process, right?

Anyway, I had to look through some old photos and I found this one of me and Richard Tarnas: 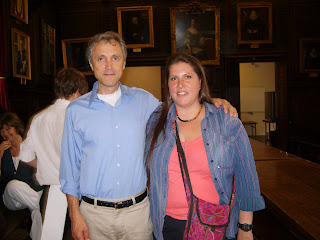 I though Richard was great--and I was especially pleased that he remembered me at UAC a few years later.

Here's a very speical Saturn conjunct Neptune with a trine to Uranus conjunct Mercury joke for teachers who get annoyed when their pupils ask: "Can't we have a fun lesson, Miss?"

A teacher was frustrated when a pupil feel asleep and started snoring as the class read "The Canterbury Tales." The teacher spun the book across the class and bounced it off the pupil's skull. Startled, the pupil asks: "What was that?"

The teacher answered: "That, was a flying Chaucer."

And no, you can't have a fun lesson!

Posted by Alex Trenoweth at 12:38 No comments: Links to this post

Things have been busy over these past few weeks, not helped by the crazy transits in my chart. In a few months I will have Uranus transiting my Saturn in the 10th (Saturn also being the handle of my bucket shaped chart and at the same time Transit Saturn will be exactly opposite to transit Uranus AND my progressed Moon will also move into Aries!). So I wonder who's going to be changing jobs soon?
I never thought I'd say it but I'm pretty fed up with teaching and I'm thinking of leaving to do other more satisfying things like writing a novel. So I've been doing just that, writing a novel which I'm really enjoying and find very satisfying. And guess who got landed for cover AGAIN today??
In other news, the Astrology Quarterly has been done and will be distributed later this week. One of the featured articles is from John Frawly who did the Carter Memorial lecture. I dug up an old photo of John and I taken at Oxford FAS Summer School: 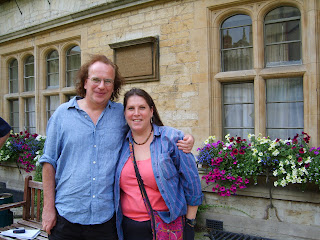 Why couldn't I find this when I needed it? Anyway, there we are looking relatively sober.

And now for the joke! I'll call this a Saturn in the 9th house jokes and it's dedicated to pissed off teachers everywhere:

Shortly after prayers in public schools were banned, a new teacher was interviewed for her first teaching post. After the interview and after an explanation of the duties that would be expected, the prospective employee said:

"Let me see if I got this right. You want me to go in the classroom and inspire the pupils to love every second of their learning and I'm supposed to encourage them to appreciate their ethnicity, modify disruptive behaviour, observe them signs of abuse and even censor their T shirt messages and dress sense. You want me to wage a war on drugs and sexually transmitted diseases and check their backpacks for weapons of mass destruction and raise their self esteem. You want me to teach them patriotism, good citizenship, good sportsmanship, and fair play and how and when to vote, how to balance a chequebook and how to apply for a job. I am to check their heads for lice and maintain a safe work environment, recognise signs of anti social behaviour, offer advice, write letters of recommendation for student employment and scholarships, encourage respect for their elders, and future employers and I'm to commincate reguarly with parents by letter, telephone, newsletters and report card even though some are more anti social than their offspring and have threatened to "sort me out" even though I have given on honest appraisal of their child's progress based on the data I have painstakingly collected. And I'm to do all of this with a board pen, a computer that takes ages to log on, a few books, a BIG smile and a salary that qualifies my family for food stamps. You want me to do all of this but you expect me not to pray?"

Posted by Alex Trenoweth at 09:16 No comments: Links to this post