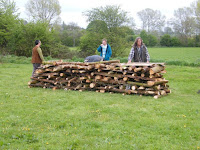 30th April 2010, Glastonbury, 10 pm, and I’m looking at the bed of glowing coals in front of me. We had spent the day watching huge piles of wood being reduced to these fiery embers and now it was my turn to walk across them in bare feet. Earlier in the day I had wished my bemused teaching colleagues a happy May Day and then left the school to walk on hot coals. They had come to expect strange things from me.

I look again at the shimmering, sparkling coals in front of me, so hot I know they would burn a hole in my hand if I were to pick 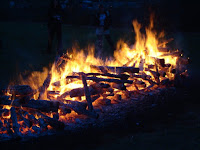 them up. I can't imagine the agony if I were to be burned on the bottom of my feet and my fear makes me take a step back to let another walker go ahead of me. I watch as her feet turn to a glowing orange and her steps kick up fire: she has become a Firewalker. And whilst I remain a petrified watcher, I cannot join her in this achievement. This moment is about overcoming fear, brushing away life’s cobwebs and affirming what one can do in life.

Symbolically I felt this fiery ground represented the threshold from fear to faith. It was a journey I felt compelled to do for reasons that had completely escaped me as I stared at what could only be described as Hellish.

And what the Hell was I doing taking such a crazy risk? Transiting Pluto opposed my natal Mars--it was such a perfect transit for the paralysis that had overcome me at that moment. And it would be ideal symbol of spending several weeks in wheelchair with badges on my feet if I got burned.

The Moon that night was in Sagittarius conjunct Antares, the baleful Heart of the Scorpion and it was in trine to Mars in fiery Leo which was in turn conjunct my natal Mercury. I looked up at the Moon and remembered She opposed Venus along the ascendent/descendent axis of my natal chart. I felt the heavens were calling on me, as a women, to embrace the boldness of The Masculine.

It was time to step into the fire or step into the shadows forever. I locked my mind in the Faith of divine goodness and walked on the fire in front of me. And at the end of Hell, there was no pain or scars to remind me of my journey. I was a Phoenix. 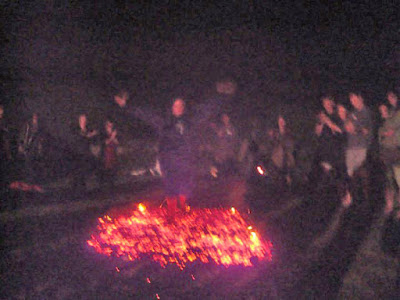 Just to prove to myself I could do it, I did it a second time.

This was not the end of the the extraordinary weekend. 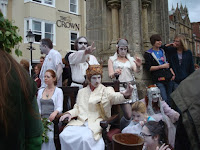 The next day was May Day, 1st of May and it would be a day that I danced with the Green Man, sang with the Devil, drank beer with the May Queen - and walked up Glastonbury Tor to watch children dance around the May Pole and clap as Morris Dancers pranced about with their sticks and hankies: where I had embraced the masculine the night before, they were embracing the feminine. At least that was how I saw it.

Of course all magic has to end (so I thought) and as I boarded the bus to leave Glastonbury and return to the real world, I wondered 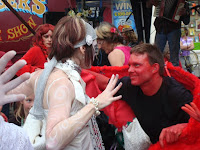 how I could bring the magic back. The bus journey gave me a chance to  reflect on my life's journey. I had come a long way from the divorced, nearly bankrupt woman with 3 children and no job. I had just moved into my new house with my new partner, I had a coveted Master's degree and a secure job in teaching and was enjoying a completely different life--one I had not dared to believe could actually happen.

These details were far too personal to share with my pupils. I guarded my private life carefully. Even as I turned the key to enter 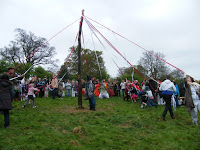 my own home, I still did not have a clue as to how I could share my extraordinary experience. I was the kind of teacher who liked to know what she was going to do well in advance.

The next morning when I got to school, I saw that I had chosen the word "Euphoria" as the theme for the week. It had been chosen weeks before but what better word to describe how I was feeling? I asked my colleagues to share some of their more adventurous experiences such as running marathons or jumping out of planes and I used them in the assembly I had to lead. Then I showed the

pupils the photo of me walking on hot goals. There was an audible gasp from the otherwise unimpressed group of fourteen year olds.

‘Miss, you’re really a sick Gangsta!’ one pupil shouted out.

But that night of fire walking was not about me but rather what I could do--and if I could do it, I wanted my pupils to know they could also do extraordinary things (but please not fire walk when I'm on duty).

This past May bank holiday 2016, gave me an opportunity to remember Firewalking. I hadn't noticed on the night but transit Saturn had opposed my natal Saturn. And if you're familiar with my Growing Pains work, then you know how significant I think Saturn oppositions are. This week transiting retrograde Saturn has been squaring my natal Uranus/Pluto conjunction and my Progressed Sun and Mercury. And I just been feeling things have ground to a complete halt (I also note Saturn was retrograde in the event chart too!). I should have been preparing for my move to India but I was spending this time untangling myself from a long term relationship, raising a bit of cash to fund a long year of travelling ahead and finding my own voice. Indeed, this article had originally been written by my partner. It has been an empowering experience to go through it and change his words to mine. I cannot even say why I let him do this as this story has been the only one I had let someone else write.

I lost my friend Jonathan Cainer a few days ago. He was more than just an astrologer to me and I am grateful I have not had to grieve alone. As a group of mutual friends gathered on the first sunset of Jon's passing, we shared our stories about him. I remarked that he was like Jupiter with a gravitational force that was impossible to escape. And as I wrote my tribute for him for the Astrological Journal, I was reminded that Jon had been a huge part of the process of transforming a bit of space junk into someone who had achieved things far beyond the limitations of her wishes. It was Jon who told me that I needed to be in a classroom and I am just humbled by the mechanics of Saturn transits that I started my PGCE in October 2002 as Saturn was in a waxing square to its natal position in my chart, that another square from that point I was Firewalking and with any bit of luck, at the next square at the end of 2017, I'll be doing something even more spectacular.

But I now see it is time for me to get to grips with letting go of my life here in London. For a few weeks I had been just marking time. But now I am finally moving forward.