OK, so here's how it goes. . .
The area of Wiltshire is crop circle heaven and with Avebury and Stonehenge around, it is naturally quite a magical place to a lot of people. In fact, it's so magical that the UK government thought it would be a great idea to surround the area with a military training ground so while you're wandering around in awe, you occasionally have to duck because of the low flying jet planes. Pure martial stuff. .
The area also boasts the famous Silbury Hill: 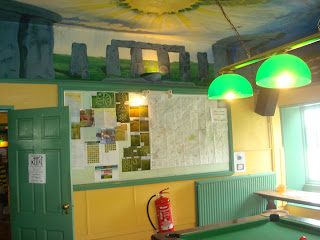 Various theories about Silbury Hill abound but it seems to have been a very special place to people on the islands for a very long time. In fact, it's even been referred to as "womb".
Near to Silbury Hill is Avebury. Now perhaps I can, every now and again, be known for my somewhat distracted mind that tends to wander onto one topic but doesn't Avebury look something like a breast?

Added to that, the area is mainly chalk and it has been said the water in the moat surrounding Avebury had been white. . .as in, like milk.
And the final piece of the puzzle. . .
Within Avebury (okay, actually within a pub within Avebury), there is a well that suspiciously looks like a erm, cervix: 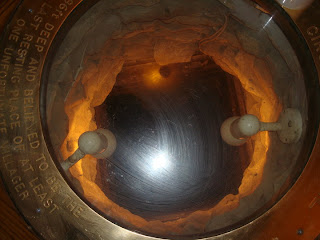 So there is a womb, breast, a cervix all continually patrolled by the very martial military. My theory? Aliens are attracted to it because it is a giant human breeding ground! They use crop circles to signal to their friends that this is the perfect place to interbreed with humans. . .that's my theory and I'm sticking to it!
To celebrate theories, here is a very special Mercury conjunct Mars joke:
During one of her daily classes a teacher trying to teach good manners, asked her students the following question: “Michael, if you were on a date having dinner with a nice young lady, how would you tell her that you have to go to the bathroom?" Michael said, "Just a minute I have to go pee." The teacher responded by saying, "That would be rude and impolite.

What about you Peter, how would you say it. “Peter said, "I am sorry, but I really need to go to the bathroom. I'll be right back."

"That's better, but it's still not very nice to say the word bathroom at the dinner table.

And you, little Johnny, can you use your brain for once and show us your good manners?" "I would say: Darling, may I please be excused for a moment? I have to shake hands with a very dear friend of mine, whom I hope to introduce you to after dinner."
Posted by Alex Trenoweth at 14:33