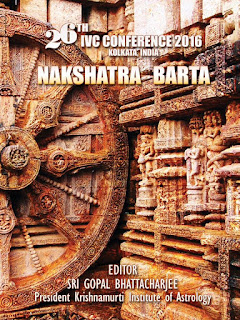 In my 30 year career as an astrologer, I've been to a lot of astrology conferences and I've enjoyed every single one of them. But I also have to say one conference in particular stands out for its beautiful culture, quality of speakers (a-hem) and hospitality: the Krishnamurti Institute of Astrology's annual conference in Kolkata India.

Up until a year ago, I had no particular interest in India. I mean it was on my list of places to visit but I had just never given any thought to go to conferences there (although on reflection I should have). As a Western astrologer, I knew there were huge differences in the manner astrology was practised between the two cultures. But I had rather stupidly assumed that it was a gulf that was too wide to bridge.

How wrong I was (and with my Mercury in Leo, you know it hurts to say that).

So that leads to the question of how I did get to India.

I had just presented my work on astrology and education in Austin Texas with my (now) good friend Naomi Bennett. She turned to me and said: "You know your work is wasted in the US and UK. Maybe you should think about India." So we looked at the astrocartography lines for me in India and saw that the Sun/MC line ran through Kolkata and the Jupiter/MC line ran through Delhi. Those were pretty good indications that I might be successful in India. A seed had been planted. A few weeks later, after doing some research, I found a conference that looked good and emailed the organiser, Gopal Bhattacharjee, to express an interest in speaking in 2016. To my surprise, he invited me to the conference in February 2015 and the rest, as they say, is history.

Every moment of my first visit to India was a gift to my senses but I was a bit overwhelmed with culture shock even before I landed. So many people, so much noise and the language was completely beyond my grasp. I was a lone traveller so how was I going to get from the airport to the hotel?

I need not have worried! Gopal had sorted it out.

You know when you see people at the exit gates holding up signs with the names of the folks they are supposed to be collecting? You know, important people? Well there were two very nice gentleman smiling and holding up a sign with my name on it. And it was even spelled correctly!

As we sped very noisily through the Kolkata night (I've never heard so many horns blaring in my life!), I was still expecting to be staying in very basic accommodation. I had been warned that I would be sick, that malaria was a real threat and that I really shouldn't expect too much. How wrong these presumptions were.  I hadn't had a clue about the hospitality of India.

Once settled in the beautiful accommodation, we were taken on a tour of the city. Living in London, I thought I would know what to expect from a busy city. Once again, nothing could have prepared me for Kolkata: the differences in culture could be seen wherever I looked. I saw men being shaved with straight razors in the open, I saw millions of people just getting on with their daily lives (washing, cooking, shopping, arguing) and of course I saw poverty like I've never seen before--and it bothered me. As I was thinking this, I saw a boy about 7 or 8 years old on a bicycle that was too big for him, pulling a small, open trailer on which a toddler sat. There were no safety precautions--and to my western eyes, it was just so dangerous with so much traffic whizzing by in what seemed like from all directions. At that moment, the boy caught my eye, gave me the biggest grin and waved. "This is my life," he seemed to say, "And isn't it great?" It made me realise who the real pauper was.

We were taken on a tour of the Kali Temple and I, who can barely manage the crowds at Sainsbury's on a Saturday morning, was oddly soothed by the chaos of what was around me. I looked up to the fading sunlight and felt this unity with my fellow travellers and natives of this hectic place. We were all in it together and wasn't it divine? All under one sky. It was a feeling that would stay with me for my entire journey through India and would return to me when I visited again. 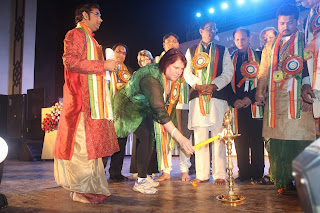 The conference itself was again something I could not have prepared for: the queue of people waiting to get in was massive. It was not unlike the crowds that might be expected at a rock concert--and we foreign delegates were directed to take the stage almost immediately. I could not believe the audience filled the hall to capacity and beyond--standing room only! I had been worried I would offend someone with my ignorant Western ways and indeed, it didn't take long. During the lighting of the ceremonial lamp, I hadn't realised I should have taken my shoes off out of respect. Whoops! I wouldn't make that mistake again. My embarrassment was completely forgotten with the opening dance.

I was completely spellbound by the beauty of the dancers, the music and the atmosphere. Oh yes, I thought to myself, I am in beautiful, mysterious India.


During conference breaks, I was again completely surprised by the enthusiasm of the crowd who wanted photo after photo of us speakers. If there was any disappointment, it was only my inability to speak Hindi. I vowed that if I was to be invited back to the conference, I would put that problem right. 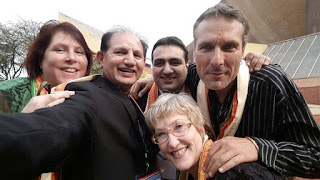 Of course at any conference, the joy comes from the people you get to know better and the people you meet. I enjoyed hanging out with fellow speakers but I was entranced by Sanjay Pandya and High Court Justice Shankar Nath Kapoor. (A week or so later, I was invited to have dinner with Kapoor Ji and his beautiful wife in Delhi along with Naomi and Ehsan Kh of Iran). As an aside, I am so pleased Naomi, Ehsan, Michelle Gould and Richard Fidlar became such close friends and that we were re-united in Cape Town later in 2015 and returned to Kolkata in 2016. 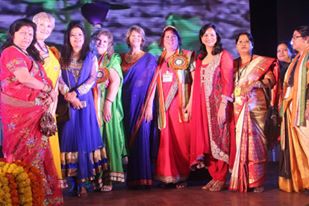 Shortly after my lecture, we were presented with the clothes we were to wear to the closing ceremonies: saris for the women and kurtis for the men. Me in a sari? Fortunately there were dressers to help because I would have worn the sari like a sparkling toga.

The biggest surprise was being crowned "Krishnamurti Institute of Astrology's International Astrologer of the Year, 2015." Yes, I got a tiara and beautiful jewellery but even better, the award was presented by Kapoor Ji and Minister for Women and Children Dr Shashi Panja--that's right: a top judge and politician at an astrology conference!

I really had no idea there was any sort of judging going on: I just wanted to show the good people of India how astrology could be an aid to education. But for me, the greatest honour came from the opportunity to meet Shashi, whose interests in women's and children's rights were so close to my own heart. I didn't have too much of a chance to speak to her at the time but we have kept in contact via social media. Both she and Kapoor Ji are very busy people but they each made time for me in their own ways. How fortunate is that? 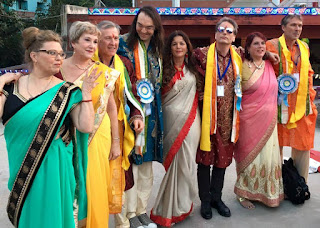 Once the shock wore off, all I wanted to do was bring more Western astrologers to the conference in 2016 and I was delighted UK astrologers Julian Venables, Robert Currey and Laura Boomer Trent, along with even more delegates from afar, were inspired to attend the KIA conference in 2016. It was nothing short of a delight to watch them take in the very things that had so impressed me in 2015. They raved about the opening dance, couldn't believe the crowds, looked beautiful in traditional Indian clothes and were just as enchanted as I was (and still remain) the year before. I was so proud of their lectures and was particularly pleased Robert Currey won a well deserved "Lifetime Achievement" award.

And oh yes, after a lot of practice, I did present my opening address in Hindi! Here I am, being very careful with pronunciation: 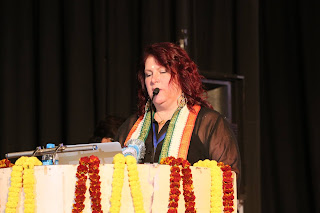 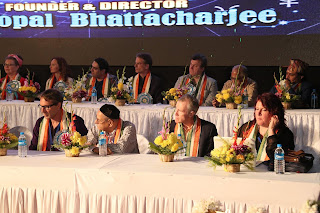 Gopal Bhattacharjee will surely go down in astrological history as the man who has so successfully united Vedic and Western astrologers in a way no other astrological conference organiser has ever done before. The wonderful collection of astrological essays are compiled in the beautiful "Nakshatra Barta" magazine and everyone eagerly looks forward to raising the bar even higher in 2018. What a wonderful honour it was to have been a part of KIA in 2015 and to be invited back in 2016. I'm not sure exactly what Gopal has in mind for 2018 but I do know he and the KIA board members have already been called to begin preparations. Already looking forward to it!

For further details about the 28th KIA Conference, go to this site
Posted by Alex Trenoweth at 00:12

The KIA conference was as you say a very special and wonderful experience from the opening ceremony to the final farewell. So much of this was thanks to the inspiring leadership and vision of Gopal Bhattacharjee.

Alex, for many of us western astrologers you are an ambassador and pioneer. You have also become a star performer in Kolkata and this is so befits life on your Sun Midheaven Astro*Carto*Graphy line. I wish you luck in Australia.

Thanks for the post and great tips..even I also think that hard work is the most important aspect of getting success.anaheim private investigator

Truly it was an amazing post. Exceptionally helpful and Informative.Thanks for sharing! Dentrix billing service

The excellent post took in a marvelous course of action Thanks exceptionally!
Security Guard Service

The post is made in particularly a common way and it contains assorted beneficial data for me.
Background Check Service

The information you have posted is valuable. The destinations you have alluded was great. A debt of gratitude is in order for sharing. smarthome

The information you have posted is valuable. The destinations you have alluded was great. A debt of gratitude is in order for sharing. loxone

I was exceptionally satisfied to discover this site.I needed to thank you for this incredible read!! I unquestionably getting a charge out of each and every piece of it and I have you bookmarked to look at new stuff you post. Dubai massage out call

I am wonderful to discover this post amazingly massive for me. Business Mobile Phone Recycling

I want to take this opportunity to say that I really love this post. It has been a good resource of information for me in my research

Much obliged for posting this data. I simply need to tell you that I simply look at your site and I think that its intriguing and enlightening. Edmonton Addiction Counseling

Astrology is best comprehended by figuring out how it started. Astrology is verifiably the most established and simultaneously right now the most mainstream everything being equal. Astrology is likewise used to extend comprehension of our own inclination. This mental methodology has developed fundamentally in the previous 30 years as an ever increasing number of astrologers build up their advising aptitudes.