Time to give up? 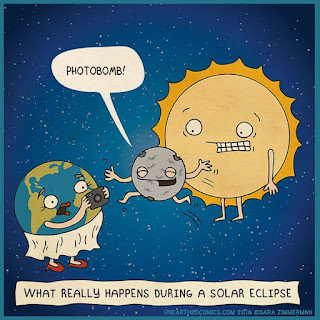 NB: This was written a few days after the eclipse in August 2017. I didn't post because I couldn't quite get to the point I was trying to make. After a bit of time and reflection, I think I finally got to it. So today, I finished this post off before moving on to a new one.

"Guys," I kept trying to tell non astrologers, "Nothing happens on the eclipse!"

"Arrgg," I thought as my inbox got jammed with astrologers sending me mile long lists. "I must be being eclipsed to be so misunderstood."

"Astro peeps," I tried again, "I said EVENTS ON THE DAY OF THE ECLIPSE,"

"BUT ALEX NOTHING EVER HAPPENS ON THE DAY OF THE ECLIPSE"

"YES I KNOW THAT!" I said over and over (at least it felt that way to me). "WHAT IS WRONG WITH YOU PEOPLE?"

So I went back and re-read my blog like twenty times and tried to make things more clear. Yes of course I know nothing ever happens on the day of the eclipse. I'm just experimenting!

Anyway, this someone else PM'd me to tell me that nothing ever happens on the day of the eclipse so I re-read my original post on Facebook. And I have to admit, it was a bit confusing. No wonder. I changed it to make it more clear.

Anyway, I thought I was eclipsed right out.

So my intention on the day of the eclipse was just to watch a few minutes of the news coverage--but I ended up getting completely sucked in. I watched the whole thing with what felt like most of the world. I thought the experience of watching the live broadcast was an incredible one: without sarcasm, I felt at one with the other observers of this incredible event. I whooped with everyone as totality was reached and whooped again when the sliver of the sun reappeared from behind the moon. It was terrifically moving. Seriously I thought I felt a collective shift.

Yep that must be the effects of the eclipse. Subtle yet profound.

I've been feeling a little weird about things recently. I joke that I'm deep, deep, deep undercover as a teacher and after a hectic tour, one needs a break. But even being locked out of Facebook, I still felt oddly exposed. Maybe this is because my progressed Moon is in Cancer. I don't know. But I needed quiet and solitude in recent weeks--which for me is odd indeed. I always feel my life is lived in the midst of one kind of storm or another (I work with teenagers day in,  day out). However, the more I tried to hide away, the more creative people got with finding me. I thought surely this had to be an effect of having one's Moon on the upcoming eclipse.

Perhaps it's exactly because life continued to be very hectic that I didn't notice that my entire approach to astrology was changing. And then I realised that the eclipse last month was the other bookend of an eclipse in 1999 (also at 28 degrees Leo). In August of 1999, hot on the heels of flunking my first astrology exam (oh there would be more flunking of exams to follow), I decided that yes indeed I did want to pursue my interest in astrology.

Eventually, I got my diploma a couple of years ago and can legitimately call myself a "professional" astrologer complete with the initials of DFAstrolS (don't knock it--lots of good astrologers gave up before they got there) after my name.

However, something's been bugging me and I haven't half been turning myself inside trying to work it out.

I sensed a need for clearing and clearance but damned if I could figure out what that meant for me and my astrology practice. Maybe, I thought somewhat pessimistically, it was time for me to step aside and find another interest.

I was eclipsed all right and it didn't half drive me nuts trying to work out what the hell was wrong.
Posted by Alex Trenoweth at 15:57

Your blog title is negative but when I read it your blog seems it to be fantastic.
If you would like to choose astrology services.