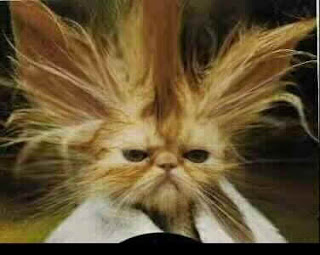 I've been struggling astrologically. I don't mean I'm having hard transits or anything like that (although I do have a transiting waning Saturn square to its natal position coming up). I mean I've been wondering what the hell was the point of being a "practicing astrologer" when I seemed to be stuck on saying the same things over and over. Surely, I've said all I can possibly say on the topic of astrology and education?

And if I can't get the non astrologers to listen to me by now, maybe the time has come for me to shut up about the topic.

I was thinking perhaps it was time to take another course in astrology or to branch out into another field. Maybe I just needed to take time off and, oh I don't know, do some painting or something. Maybe I needed to take a pottery class.  I hate to admit it but I was feeling eclipsed by the eclipse. With the need to get the back-to-school message out, I was competing with what felt like every other astrologer in the world trying to get their two pence worth in about the damn eclipse. I even kind of tried to join in the fun. But I was defo feeling the frustration of it all.

And then, um, I got totally eclipsed by a boy (uh oh). Well that certainly took my mind off of astrology.

Except it totally didn't.

I had found it so totally amusing to be mooning about (as it were) after some man I had met at the gym that I jokingly put my musings on Facebook. And like the Moon in Leo/Sun in Cancer I am, got a whole lot of attention I wasn't sure I wanted.

So much for being eclipsed by the eclipse. I never thought there would be so much interest in my love life!

But aside from hearing some very conflicting advice from astrology friends about what I should do about my predicament in love, I also had the opportunity to step away from the persona of Alex the Astrologer and just be Alex.

I mean, who am I if not an astrologer? I've spent that past 18 years focusing on becoming a professional astrologer and maybe I had forgotten who Alex the normal person was.

Yeah I'll just wait until you stop laughing about me being normal.

In fact, let me reveal that Mr Man (as I call him) thinks I am pretty together. He's even marginally impressed with my organisationals skills, fortitude and focus, believe it or not. For a few days this felt like such a cool manifestation of my natal Sun trine Saturn that it felt totally natural and not a little unlike I had been denying the Saturn in me all the time I was trying to embrace the Ura-- Oh forget it.

So fast forward (or at least it feels like a lot of time has passed since my hot date last weekend) to hopping on the plane to Edinburgh to speak to the Scottish Astrological Association on the topic of astrology in education. Of course, I love to travel. And I love this particular lecture (and its variations) but I was thinking I really needed to find something else to lecture about. I mean what is the point? I was thinking no non astrologer is ever going to get it. Nothing will ever change.

No one is ever going to listen to an astrologer.

I've said and written all I can say and write.

But as I was lecturing, I found myself consumed by the passion to make a difference. And over the cups of tea afterwards as I continued to answer questions about my research, I knew the fight wasn't over just yet. And when someone like Mark Cullen tells you that he respects your genuine and original research, you know the job isn't done. Maybe, I thought to myself, I'll come to the end of my research and someone else can carry the can for awhile.

This afternoon, as I tried to make a plan for my next steps, I came across this article. It's about children who have committed crimes when they are in their early teens and who will be imprisoned for the rest of their lives. I passionately believe that with a little astrology, a difference can be made to the lives of so-called lost children. I don't think I've tried hard enough to make the required changes, to call attention to the research or, for that matter, to finish what I've started.

In the middle of a busy cafe in the middle of Edinburgh, I felt white hot tears of frustrated anger spill over. And I just knew my job in astrology and education is far, far from being over. Somehow I have to keep pulling the rabbit out of the hat. I have to find someone who is in a position to listen to me.

So if you're tired of me rabbiting on about astrology and education, well just bugger off and go do some painting or something. Join a pottery class.

I got work to do.