Was ISAR nearly two weeks ago?? As I’m still on an astrological high, it doesn’t seem like it!

If you’re going to invest the time, money and energy into attending an astrological conference (or any type of conference for that matter) then you want to be sure you are investing wisely. Personally, I don’t attend conferences for the food, the hotel or the location but rather for the people, the networking, the learning and the laughs after hours. So who else actually comes to the conference is very important.

The International Society for Astrological Research (ISAR) conference is held every other year in a different location in the continental USA and is one of the biggest astrological events in the world. It could be very easy to be swallowed up by the atmosphere unless you walk through the door to register and bump straight into President of ISAR Ray Merriman and one of  the astrological writers you most admire, Erin Sullivan. Which is exactly what happened to me. Ray has been a personal friend for nearly a decade but Erin I had only admired from afar. We had exchanged numerous Facebook messages and before actually meeting her in the flesh, I had been a little worried about what I would say to her. I need not have worried! We got on like a proverbial house on fire! 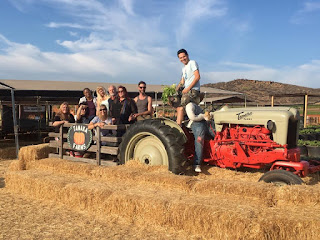 Once I registered and settled, it didn’t take long to find other friends (my astro brother Ian Waisler, Demetrius Bagley, Elizabeth Kullen, Cindy Chamberlin, Margaret Gray, Nick Polimenakos and others) and be swept off to nearby Tanaka Farms to pick organic produce for our (independently organised) vegan supper. And who should I meet straightaway? Dennis Harness!! Like Erin, Dennis is an astrological elder whose writing I admire. Chatting amongst the rows of pumpkins, getting lost in a cornfield maze and petting goats is one hell of a way to get acquainted!

Ian had very cleverly found an Air B and B near 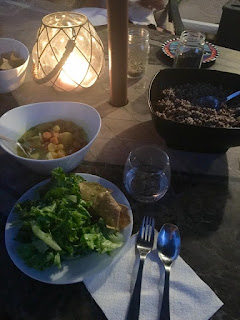 to the conference hotel and with the help of housemates, had prepared a sumptuous cruelty-free meal for all of us. Oh and I got to sit next to Dennis!

All of this was before the conference actually started!

The opening ceremony of any conference is important and I was not disappointed with this one: Aleks Imsiragic had put together one of the best and most exciting introductory trailers I have ever seen. I was so proud to see several of my personal friends from around the world featured. But more than that, it made me really look forward to the rest of the conference

As I have mentioned elsewhere, I am not a particular fan of politics but the recent presidential debate had ignited my interests. And a good thing too—the grand opening ceremony centred around astrological predictions for the upcoming election. I was floored by the different methods each 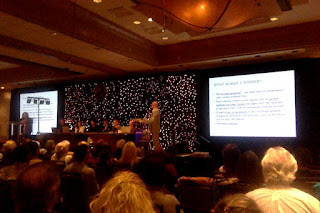 astrologer used to come to the same conclusion: Hillary for the win!

I was so pleased the board had collaborated in generating ample PR for the conference—and like it or not, the controversy around securing Hillary’s accurate time of birth not only had astrologers and non astrologers alike talking, it also showed astrologers doing their homework by not just accepting any old data that comes their way.

After the opening ceremony, we were sprung loose to catch up with friends and acquaintances and to take in our new environs.  I got to see my beloved astro sisters Ana Carrapichano and Michelle Gould and catch up with all the gossip

Day 2!
Well Day Two was my book signing! And as this is my blog and I’m self-employed, I make no apologies for plugging myself!

How generous of ISAR to arrange book signings for us writers! I was not only pleased to shift some books but also to chat with other astrologers about my work in astrology and education. I loved the support I received from other astrologers (is there a better acknowledgement than having someone tell you how much they love what you do?). In particular, I was thrilled to be invited to work with Kepler College!

It was so fabulous to see my brilliant friend and head of Cosmic IntelligenceAgency Julija Simas and fellow agents Armand Diaz, Cassandra Butler, Vanessa Guazzelli Paim, Demetrius Bagley and Margaret Gray (who I'll be collaborating with very soon in Dublin) at our board meeting to discuss upcoming projects including webinars, interviews and a whole slew of other exciting goodies coming your way very soon. Just check out that lovely tablecloth (really a delicious silk scarf that Julija gave to me)! Oh and  I got to have dinner with  internet sensation David Palmer “The Leo King" and his lovely fiancée Leanna!

Coming up: The INCREDIBLE ISAR Banquet! 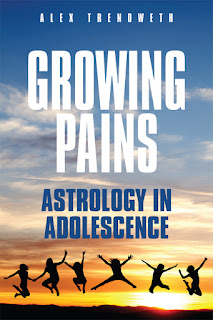 Alex Trenoweth was voted Best International Astrologer, 2015 for her dynamic presentation on her innovative and original research into Astrology and Education. Her book, "Growing Pains" is an exciting development in astrology as it combines classroom teaching experience, sound investigation and the potential to have a positive impact on struggling adolescents, parents, teachers and those who have been labelled "at risk". She writes the weekly and monthly horoscopes and other articles for the Cosmic Intelligence Agency, one of the largest astrological social media groups on the web and was also a speaker for the AstroSummit, a guest lecturer for the London School of Astrology and has spoken at several UK local astrology groups. Upcoming international events include Breaking Down the Borders, the Kepler Conference, Congresso Internacional de Astrologia (Portugal) NORWAC and the San Francisco Astrology Society.  Alex is also a Professor of Western Astrology and Secretary General of International Affairs for the Krishnamurti Institute of Astrology and will will be taking up her residential post in India early 2017. For queries, consultations or syndications, please contact Alex via www.alextrenoweth.com or leave a message in the comment section.
"Growing Pains" can be purchased in paperback or kindle format on Amazon or can be signed and posted directly to you by Alex.

About the New Book 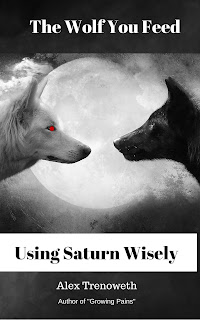 There are two wolves fighting inside of me, the old story goes, one wolf is good and the other is evil. “But Grandfather,” asked the child, “Which one wins?” The Grandfather answered, “The wolf I feed.”

We might like to think that being good is a natural instinct. In fact, doing the right thing takes a conscious decision. Every day, we are met with temptation to get ahead at the expense of someone else, to get away with something we know is wrong or to cut corners if we think no one is watching.

Following on from her powerful book on astrology and Education, “Growing Pains”, Alex Trenoweth explores the benefits of using “the bad guy” of the solar system: Saturn. Often avoided and seldom understood, if we understand our own Saturn then we can help others to understand theirs. Using case studies of  highly successful people contrasted with convicted serial killers, Trenoweth deftly demonstrates the dire consequences of feeding the wrong wolf.